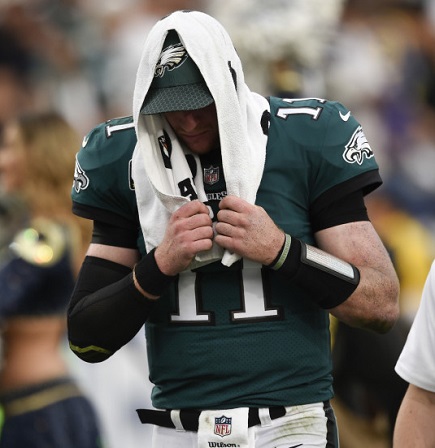 When Carson Wentz left last week’s game against the Los Angeles Rams with an apparent knee injury, it signaled a possible major setback to the Philadelphia Eagles’ Super Bowl dreams, and maybe your dreams of winning a fantasy championship.  When a torn ACL was later confirmed, the fantasy football landscape changed drastically if you owned Wentz or a plethora of other Eagles’ players.  You may be wondering what to do now, and here at The SFFS, we have some answers for you.

If Carson was your fantasy QB, you’re probably sitting in your league’s semi-finals scrambling to find a replacement on waiver wires.  Here are a few options that are readily available in most leagues to keep you from reaching for the sky and screaming “Whyyyyyyyyyyyyyy!?”

The most obvious, but least promising, choice is Nick Foles, as he will step in at quarterback for the Eagles this week against the Giants.  Nick has enjoyed success in Philly before, throwing for 6,753 yards and 46 touchdowns with the Eagles from 2012-2014. The problem is, he’s only started one game since December 6, 2015 and it’s hard to know what to expect from Wentz’ backup.  Filling in after Carson left with the knee injury last week, Foles did complete six of 10 passes for 42 yards.  The good news is the Eagles will take on the Giants in week 15, who have given up the 3rd-most fantasy points to opposing QBs and who just allowed a struggling Dak Prescott to put up 332 yards and three TDs.  Even though it’s a great matchup, it’ll be best to take a wait-and-see approach with Foles this week, if you can.

Two straight games with 260+ passing yards and two TD’s combined with an outstanding matchup against the Houston Texans in Jacksonville makes Bortles your number one target on waivers this week.  Houston is strong vs. the run, but terrible against the pass, indicating that Bortles will get to air it out against the defense that’s surrendering the sixth-most points to opposing passers.  With the Texans likely trotting out their own backup QB against the Jags’ stellar D, look for Bortles to have plenty of opportunities to get it in the endzone this week.

Set to make his third straight start for the 49ers, the “Italian Stallion” will take on the Tennessee Titans in week 15.  While the Titans have been decent against the pass this season, Garoppolo has shown outstanding poise and accuracy in his last two starts, while showing a real connection with speedster Marquise Goodwin.  Touchdowns have been a bit scarce so far for Jimmy, but the yardage has come in bundles.  Expect 300-plus yards this week for the former Patriot passer.

Yes, it pains me to say it, but Joe Flacco has become a relevant fantasy option lately. Showing a new-found ability to push the ball down-field, Flacco has thrown for 269 yards in each of the last two weeks, with four touchdowns to only one interception over that span.  Now he gets to take on the hapless Cleveland Browns, who give up over 243 yards and two TD’s a game to opposing quarterbacks.  It’s a great matchup, but the game does run the risk of becoming the Alex Collins show if the Ravens’ defense shuts down Cleveland’s offense.

Options less likely to be on waivers (but if they are-grab ’em!)

–Case Keenum, : At home against the reeling Cincinnati Bengals.

–Jameis Winston: At home vs. the Atlanta Falcons, who give up 9th-most pts to QBs.

–Aaron Rodgers: Questionable to come off IR this week against Carolina.

How Nick Foles will affect your Eagles’ players:

The Wentz injury could actually be a boon to these players’ owners. Unlikely to put the same passing load on Foles’ shoulders, Head Coach Doug Pedersen will look to rely on a stout defense and a strong running game over their final three games.  Over the past four weeks, Philly has thrown 152 times vs. 124 run plays.  Look for that number to flip, increasing the value for all three Eagle backs. Unfortunately at this point, it’s unclear who will be the lead back, but Ajayi seems to be trending in the right direction.

Jeffery looks like he has the most to lose with the switch to Foles, as Nick doesn’t have the same arm strength as Wentz to get the ball to the outside.  Alshon had built a solid rapport with Carson but is unlikely to have the same relationship early on with Foles, though he did see three targets from Foles in week 14.

Agholor was also targeted three times by Foles against the Rams, and with his speed and run after the catch ability, he should see plenty of screens and short dump-offs over the middle, making him a worthy play in PPR-leagues.

Tight Ends are usually a great security blanket for ALL quarterbacks, let alone backups making their first start of the year.  If healthy, Ertz should still get plenty of action over the middle, though last week Foles targeted his tight-end (Trey Burton filling-in for Ertz) just one time in his 10 throws.