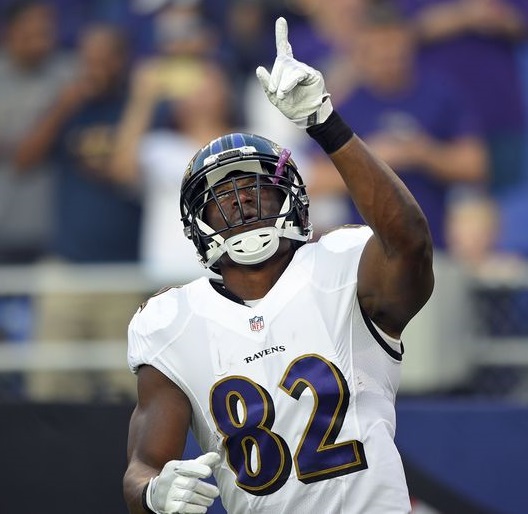 Benjamin Watson, well known as a steady and dependable NFL tight end, really stepped into the national spotlight off the football field in November 2014. Then a member of the New Orleans Saints, Watson posted a stirring response to the Court’s decision in the Michael Brown shooting in Ferguson, Missouri on Facebook. Watson’s post addressed the anger and frustration felt after the court’s decision not to prosecute the police officers involved in the shooting, but more importantly, it looked ahead with encouragement and summed up Ben’s hope that America would turn to the Gospel and be transformed by placing their trust in God.

In a short period the Facebook post had been shared more than 378,000 times and had over 670,000 “likes”.  The amount of attention garnered to the post was spreading like fire, and people all over the world were able to see and acknowledge all the hurt that was occurring, but were also introduced to the potential healing and change offered in Jesus Christ.  In an interview with CNN, Watson offered up these words: “Internally our sin makes us prideful, it makes us judgmental, it makes us prejudice, which leads to racism, it makes us lash out at people that don’t look like us. It makes us do all those things. It makes us lash out in anger and makes us point fingers.”

In the days and weeks following his post, Watson continued to speak about the importance of coming together as a Country to understand all sides of the conversation and acknowledging the debate while remaining respectful to the experiences of others. Today, over one million people have read Ben’s post, thrusting him into the national spotlight, where Watson has continued to push towards unification and understanding through Jesus between Americans all around the Nation.

In 2016, during his 13th NFL season, Watson published Under Our Skin: Getting Real About Race—and Getting Free from the Fears and Frustrations that Divide Us. In his book Watson looks back on his life and draws from his role as a husband and father to examine both sides of the race debate while looking to faith in Christ as a step toward healing.

In 2018, Ben will be entering his 15th NFL season, and recently signed a one-year deal to return to the New Orleans Saints, where he played tight end from 2013-2015.  A 2004 Super Bowl Champion with the New England Patriots,  Watson has amassed over 495 career receptions for 5,485 yards and 42 touchdowns. He continues a presence on social media, discussing faith, racial division and fatherhood.  In 2017 he published his second book, The New Dad’s Playbook: Gearing Up for the Biggest Game of Your Life and is a spokesman for the NFL’s All Pro Dad Campaign.  Using his platform as an NFL athlete and respected social-media blogger, Watson has created the One More Foundation, which educates, meets the physical needs and brings the hope and love of Jesus to the underprivileged throughout the greater Baltimore area.  Making his impact felt on the football field over the course of an improbably long career, Ben strives to make an even bigger impact off it.