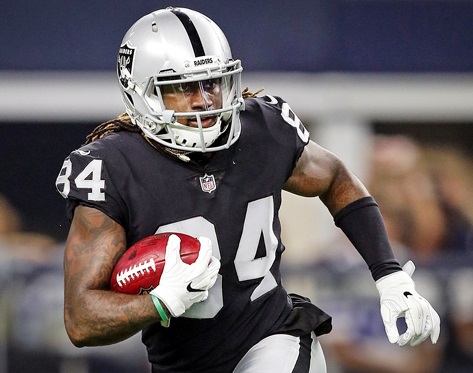 The SFFS takes a look at five under the radar players to help you win your week 13 matchup and get into your playoffs.

Seth Roberts seems to be the name most pundits are focusing on in week 13, but instead look for the speedy Patterson to have the biggest impact in the Raiders’ receiving corps. With Michael Crabtree suspended and Amari Cooper out with a concussion, Patterson steps into the starting lineup for the first time this year. Last week against Denver, after both Crabtree and Cooper left in the first half, Cordarrelle saw three second-half targets, corralling all three for 72 yards, including a 54-yarder on third-and-18 late in the fourth quarter to clinch the Raiders’ win.  This week the Raiders will take on the Eli-Manning-less New York Giants and a defense that is giving up almost 270 passing yards a game.  Expect 4-5 catches and a touchdown for the big-play Patterson.

One week after sacking Indianapolis Colts’ QB Jacoby Brissett eight times, the Titans will get to take on the extremely un-athletic Tom Savage and the Houston Texans. In his last four games, Savage has been sacked eight times with ten turnovers, and has led Houston to more than 23 points just once.  While the Titans’ D has been a little hit-or-miss lately, they will look to get back on track in week 13 against an offensive unit surrendering the 6th-most fantasy points to opposing defenses in 2017.  Expect four sacks and a turnover or two for the Titans this week in Tennessee.

After missing last week due to a groin injury, the ‘Hawks Davis was not listed on their final week 13 injury-report and will be good to go against the Philadelphia Eagles.  Though he’ll be facing an elite-run defense in Philly, Davis is in line to see a lot of touches, as he displayed the ability to contribute in both the run and passing game in his last game, week 11 against Atlanta.  In that matchup with the Falcons, Davis carried six times for 18 yards with two catches for 41 yards before leaving in the first half with the afore-mentioned groin injury.  While not eye-popping numbers, Davis is an intriguing option this week as he is the only Seattle back who has demonstrated he can contribute on all three downs.  Look for Davis to cut heavily into both Eddy Lacy’s and J.D. McKissic’s touches, getting double-digit carries and 4-5 targets in week 13.

Though definitely not a house-hold name, Foster is a good bet to see plenty of attention in the Cardinals’ week 13 matchup with the Los Angeles Rams.  Named Arizona’s third-down back following the release of Andre Ellington a couple weeks back, Foster has seen his role grow in the passing game, with five catches for 44 yards in his last two games.  Facing the high-scoring Rams, look for Foster to sub in for Adrian Peterson on nearly all passing-downs, which could bode well for Foster owners, especially in PPR leagues as the Rams have given up the 2nd-most fantasy points to opposing running backs this season.

Clearly the biggest name on this list, there’s still a good chance that Winston is sitting on your league’s waiver-wire after missing the Buccaneers’ last three games with a shoulder injury.  Declared healthy by Head Coach Dirk Koetter, Winston was a full-participant all week in practice, and will get to take on the Green Bay Packers, who are allowing over 17 fantasy points per game to opposing QB’s in 2017.  Winston should put up plenty of yardage in week 13 against a team that given up at least 23 points eight times so far this year. The temperature is expected to hit a balmy 50 degrees in Green Bay.