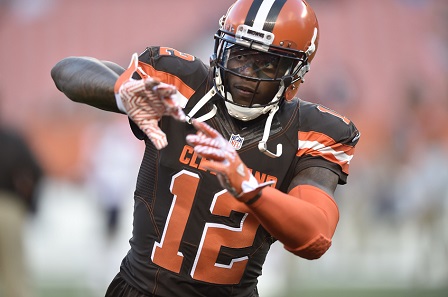 Week nine of the NFL regular season is in the books.  If you’re not quite happy with the way your roster is shaking out, we have the top five players for you to target on your league’s waiver wire for week ten.

Against the New York Giants in week nine, Woods enjoyed his fourth straight game with at least four receptions and 59 yards.  Becoming a key cog in the Rams’ emerging passing attack, Woods warrants WR3 status this week against the Houston Texans in PPR leagues and has flex appeal in standard leagues, especially for those dealing with byes.  Houston has given up the 6th-most fantasy yards to wide receivers this year and is coming off a week nine game where they surrendered 308 yards and two TD’s to Jacoby Brissett and the Colts.

In the 49ers first game without leading receiver Pierre Garcon, Goodwin was targeted eight times, finishing with two receptions for 68 yards.  The true definition of a boom or bust player, Marquise is capable of making a big play at any time, and will continue to see a large target share.  This week, matched against the same New York Giants secondary that gave up over 300 passing yards and four TDs to the Rams, Goodwin warrants flex consideration, especially if new 49ers QB Jimmy Garoppolo gets the start.

Conditionally reinstated from suspension by the NFL, Gordon is cleared to attend meetings this week and start practicing November 20th. Depending on how he looks, it wouldn’t be a surprise to see Gordon return to game action in week 13, though don’t expect him to be in 2013 form.  The Browns do need a receiver badly, and Gordon is worth a speculative add purely on his athleticism and opportunity in an extremely thin depth chart.

While Kelly has been extremely inefficient with his touches so far in 2017, averaging just 3.2 yards on his 58 carries, he remains the Redskins’ preferred ball-carrier on early downs.  Samaje Perine fumbled a handoff, and his chances at the starting gig, this past week in Seattle, as Washington Head Coach Jay Gruden’s hatred of fumbling is quite well-known.  Though Rob has no role in the passing game and is not likely to pile up the yards on the ground, he is a safe bet for goal-line work this week against the Minnesota Vikings.  Expect 30-40 yards and one touchdown, making him a solid, cheap DFS play and a flex option in standard leagues.

New England Patriots Defense/Special-teams (owned in 38% of Yahoo and 29.2 % of ESPN leagues):

Coming off their bye, the Patriots defense will matchup with the struggling Denver Broncos at Mile High.  While the city of Denver has not typically been kind to the Patriots in the past, New England’s D is coming in having posted four straight weeks of allowing less than 20 points, while the Denver offense has scored more than 20 points just twice in 2017.  With Brock Osweiler named the Broncos’ starter at QB for the game, look for the Pats’ defense to post two turnovers and three sacks .