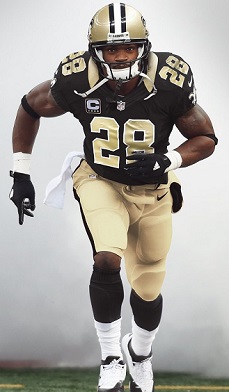 So week five of the NFL regular season is in the books.  If you’re not quite happy with the way your roster is shaking out, we have the top five players for you to target on your league’s waiver wire for week six.

Adrian Peterson, RB Arizona Cardinals (owned in 43% of Yahoo and 47.5% of ESPN leagues):

Traded today to Arizona from New Orleans, Peterson instantly jumps from a seldom used player to a guaranteed two-down role.  Andre Ellington will remain the passing back for the Cards, but expect Adrian to get 12-15 touches a game.  With a struggling o-line, Peterson may not be very efficient, but where else are you going to get a high-volume running back off of waivers.

The Falcons should see the return of defensive end / linebacker Vic Beasley in week six, which is terrible news for their opponent, the Miami Dolphins.  The Jay Cutler led Miami offense has struggled incredibly so far this year while averaging just 8.25 points scored per game.  Atlanta’s D has registered at least two sacks in each game while Cutler has been sacked 10 times so far this year with three turnovers.  Expect three sacks and two turnovers for the Falcons’ defense in week 6.

Marlon Mack, RB Indianapolis Colts (owned in 10% of Yahoo and 3.4% of ESPN leagues):

Playing behind Frank Gore, Mack managed 91 rushing yards on nine carries with a pivotal touchdown last week against the San Francisco 49ers.  Mack now has two rushing TD’s on the year, and should be in line for a big increase in touches with the aging Frank Gore looking like a much slower player.  Colts’ Head Coach Chuck Pagano recently said he wants to get the ball in Mack’s hands more often, so expect at least 15 touches for Mack this week vs. the Tennessee Titans.  Even if Gore remains the starter, Mack will still get plenty of playing time, making him a must-add in all formats.

Fellow running backs Paul Perkins and Orleans Darkwa are dealing with injuries and Odell Beckham and Brandon Marshall are out for the season.  Terrible news for Giants’ fans, great news for Vereen owners.  With a severe lack of weapons at his disposal, expect Eli to target Vereen extensively in the passing game against the Denver Broncos.  It would not be unrealistic for Vereen to see double-digit targets (he had 10 in week one) and to finish with 60 receiving yards.  Wayne Gallman will continue to see early work, but Vereen is a must add in PPR formats and an intriguing flex option in standard leagues.

Taylor put up a disappointing zero fantasy points two weeks ago (ATL had a bye in week five) against the Buffalo Bills, but he did still see five targets on 60 snaps. This week he will face the Miami Dolphins, a middle-of-the-road pass defense with fellow receiver Mohamed Sanu expected to miss the game with a hamstring injury.  With Sanu out and a gimpy Julio Jones, Gabriel should get plenty of snaps and 6-8 targets.  A boom or bust player, he could easily convert one of those targets into a fifty-yard touchdown.  Worth an add if you have multiple receivers on a bye and a cheap DFS flyer.