We’ve all been there. Sitting in camp chairs or developing bleacher-butt while watching floats, high school bands, and hot rods pass by on a sunny day for the local parade. Then it happens… Oh no… A rumbling, a flash, and then a down pouring of rain. Yup, everyone has had their “parade rained on” and I’m sure you will tolerate your parade being rained on even one more time because you have already read this far into a very lengthy intro.

Julio Jones is a bigger risk for being a dud due to ailments this year than anyone is stating! I’m serious. Andrew Luck-type big risk (catch up on his injury update here). Ok, well maybe not that big. But big. Big-big.

Admittedly this is going to be a hard statement to defend because for the last three years he has been… Well… Awesome. Over the past three years he has averaged 107.6 catches, 1,624.3 receiving yards, and 6.6 TDs per year, and that is with missing three games due to injury over that same stretch. Accounting for the injuries, that gives him a per-game average of 7.2 catches, 108.3 yards, and 0.4 TDs. Again, pretty awesome. But fantasy football isn’t just about what has been, but the ability to predict what will be.

This is where the storm clouds begin rolling in.

If you’ve owned Julio Jones in your league, you know that he deals with a fair amount of soft tissue injuries (hamstring strains, ankle sprains, and the dreaded turf toe most recently) through the years that limit him, but rarely prevent him from starting.  In college he did have some screws placed in his right foot for a fracture and missed 11 games in 2013 from a reinjury. More screws were then placed to facilitate quicker healing. Since then he has basically been back to his old self, fighting through dings and dents here and there.

Now you are going to see some lightening.

Jones missed two games last year due to a sprained toe in late November of 2016 but managed to put up decent WR1 type numbers in the five games following his return (averaged 6 catches, 98 yards, and 0.8TDs per game) even though his right toe continued to bother him.  Heck, Atlanta went to the Super Bowl thanks to his efforts, as Jones almost single-handedly beat Green Bay with 9 catches, 180 receiving yards, and 2 TDs!

This past off-season, on March 6th 2017, Julio Jones had another “minor surgery”, this time to correct a bunion on his right great toe, though he’s had plenty of time to heal and be full-go by the start of the regular season.

I think I felt a rain drop. 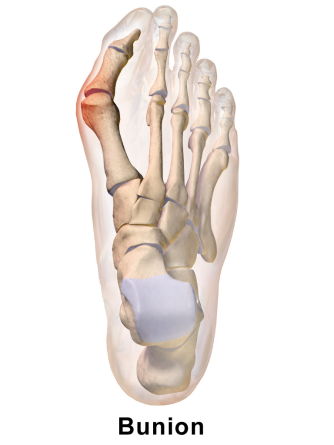 A bunion, also called hallux valgus deformity, is when the great toe begins to turn laterally toward the adjacent toes, stretching the ligaments at the base of the great toe, deforming the joint, injuring cartilage, and eventually causing significant damage to the joint capsule. (See picture).

I believe that Julio Jones acquired this secondary to the interventions he has had on his right foot, in particular the screws that he has had placed, which has slightly shifted how weight is being transferred through his foot and eventually led to formation of a bunion.

I believe this bunion was really the source of his “turf toe”, i.e. sprain of the ligaments in his great toe, and Jones is trying to prevent re-injury of his great toe by getting surgical intervention.

No, I definitely felt a rain drop.

Surgery for a bunion is no joke. While there are over 150 different variations of surgical interventions for hallux valgus, Jones most likely had a form of an osteotomy. While there are multiple variations, generally a podiatrist will remove a portion of the metatarsal head (yes, removing bone), shorten the medial tendons and tack them back in place, and lengthen the lateral tendons and tack those back in place to help move the great toe in proper alignment. By “tack” I mean they use plates, pins, screws, and at times just let the tendons adhere on their own. I suspect because Jones’ quick healing is critical, he had some hardware used. Studies indicate athletes can return to full activity in as little as eight weeks, however, average healing time is 3-5 months with full healing taking up to 12 months.

The surgery Julio Jones had in the off-season may have fixed his bunion, but it didn’t fix the source of the problem. Without going into detail of foot mechanics, once those screws were placed in Julio’s foot the way his weight shifts through his foot changed, if even only slightly. That slight change I believe is what caused his bunion. The surgeons may have straightened out his toe, but the slight change in his weight bearing angle that was significant enough to turn his great-toe crashing into his other toes wasn’t fixed. Therefore, he is prone to the same injury as this procedure at best is a temporary fix.

I suspect Jones will continue to deal with right toe issues that will continue to limit his play, especially as the season wears on. It would behoove the Atlanta Falcons to give Jones plenty of rest in-between games in order to protect their star wide receiver, but from a fantasy perspective that means a wide receiver with decreased stamina due to lack of conditioning.

BOTTOM LINE: Julio Jones is at high risk for injury and will likely miss up to a handful of games when you need him the most at the end of the season. He could be a good sell-high/buy-low trade mid-year if you want to avoid the risk.

Disclaimer: I’m not an orthopedic specialist / podiatrist. However, I am a family nurse practitioner with access to medical literature allowing research into outcomes regarding particular injuries and ailments.