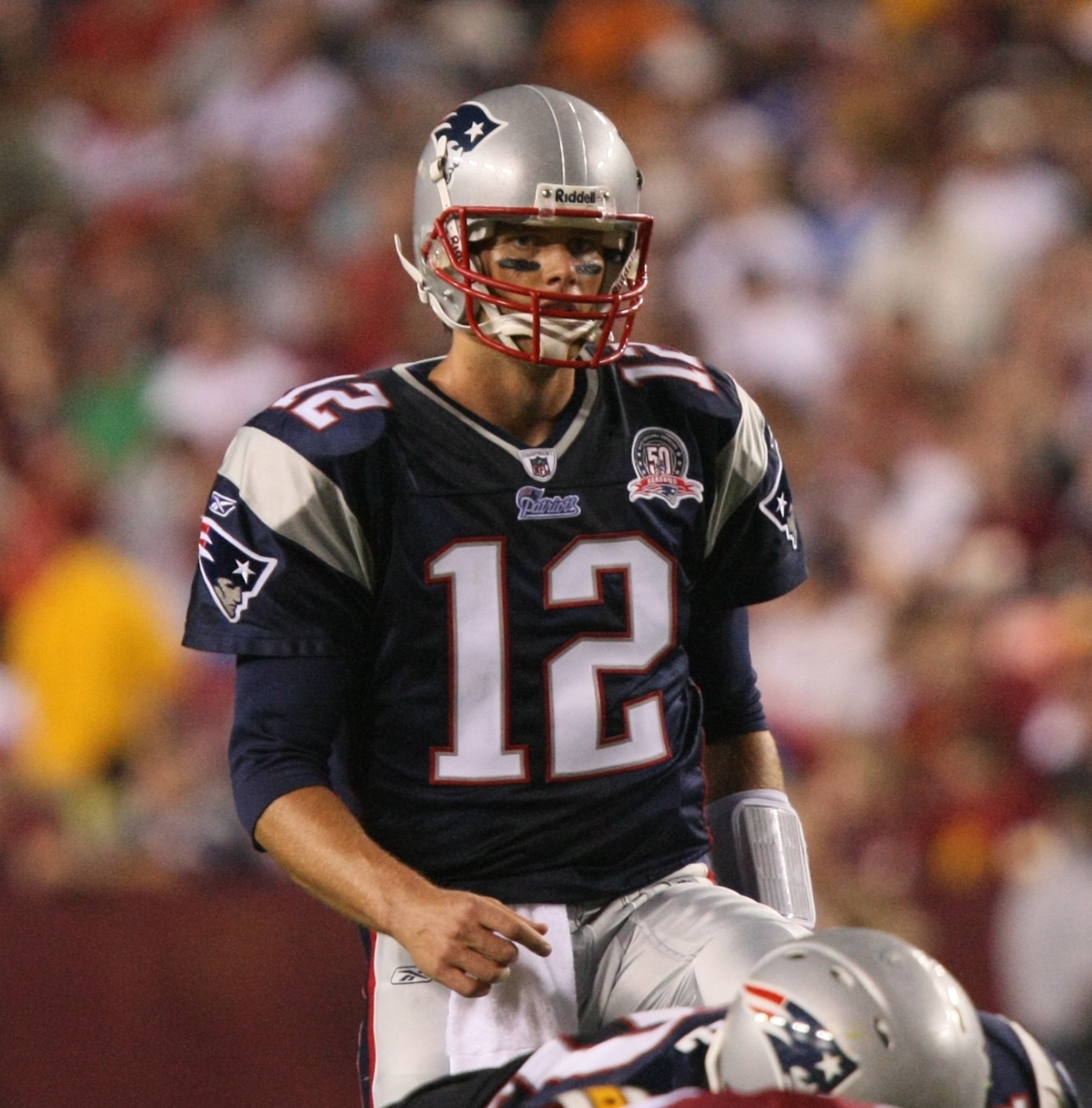 28 touchdowns to two interceptions, one loss in fifteen-2016 starts and the greatest comeback in Super Bowl history.  What can you say about that?  Not much, other than admit that Tom Brady’s 2016 season may have been the best ever for a quarterback.  Following a four game suspension to start the year, Brady came out throwing in his first game of 2016, with 406 yards and three touchdowns against the hapless Cleveland Browns.  Over the course of his 12 regular-season starts, Tom kept on throwing, averaging 296 yards passing and 2.3 td’s a game while completing 67.4 percent of his passes, finishing as the 15th-ranked fantasy QB in ESPN standard scoring leagues.  Brady’s average of 21.55 fantasy points per start would have ranked him as the third-highest scoring QB over the course of a full 16-game season, behind Aaron Rodgers and Matt Ryan.  Playing in his 17th NFL season, Brady showed no signs of slowing down as he posted his third-highest fantasy points-per-game average since 2008.  With plans to keep playing well into his forties, Brady will enter 2017 with his most dynamic complement of targets since 2007.  In March New England traded for electric wide receiver Brandin Cooks, who will bring back to back 1,100 yard seasons along with deep speed and an ability to line up in multiple spots to the Patriots’ offense.  Dependable slot-receiver Julian Edelman returns, along with wide-out Chris Hogan, who averaged 17.9 yards on 38 receptions during his first year in New England.  Outside receiver Malcom Mitchell will look to build on his impressive rookie season.  Playoff hero Danny Amendola is back on a restructured contract  and free-agent running back Mike Gillislee was brought in to share backfield touches with receiving threats James White and Dion Lewis.  Tight End Rob Gronkowski, who has averaged over nine touchdowns a season since 2010 and played just eight games in 2016, is finally healthy. The former All-Pro TE will be playing on a restructured contract that offers numerous playing time and performance bonuses.   Most importantly, offensive line coach Dante Scarnecchia returns for his 34th NFL season.  Scarnecchia has been instrumental in turning around the offensive line from a porous 2015 season (see AFC Championship Game) to a truly dominant unit in 2016.  With a plethora of targets preventing defenses from double-teaming any one receiver and an o-line giving him plenty of time, expect Brady to put up huge numbers this year. 2017 Prediction: 399-592 for 4,736 passing yards, 39 touchdowns and seven interceptions.

Following a slow start to the 2016 season,  Packers’ QB Aaron Rodgers went on to post huge numbers while leading Green Bay to a 10-win season and an NFC Championship game appearance. After “guaranteeing” that the Packers would run the table following a 4-6 start on November 23, Rodgers averaged 28.5 fantasy points a game over the final six weeks of the regular season.  Finishing third in the NFL’s MVP race, Rodgers led all QBs in standard-league fantasy points, totaling 4,428 yards and 40 touchdowns with just 7 interceptions.  Aaron also added to his fantasy value with the ability to run, as he chipped in 369 rush yards and four rushing td’s in 2016.  Rodgers’ emergence late in the season happened to coincide with the improving health of receiver Jordy Nelson, who struggled early as he recovered from 2015 ACL surgery.  As Nelson got his legs back under him over the course of the year, Rodgers numbers jumped, with the 12-year veteran posting nine games with over 25 fantasy points after Green Bay’s week four bye.  Looking to build on last year’s regular season momentum, Packer’s GM Ted Thompson was unusually aggressive in free agency, signing tight ends Lance Kendricks and Martellus Bennett, with the latter coming off a 55-catch season with the Super Bowl Champion New England Patriots.  Quick passes will be the name of the game for Green Bay in 2017 after losing two offensive-line starters in free-agency, with Randall Cobb and wide receiver turned running back Ty Montgomery offering plenty of run-after-the catch ability.  With deep-threat Jordy Nelson drawing plenty of coverage over the top, look for Rodgers to funnel the ball short to his tight ends and dynamic playmakers, resulting in less yardage but a higher completion percentage.  When Eddy Lacy left for Seattle in free-agency, the Packers were left without a true bell-cow running back, leaving the Green Bay offense to once again rest on the arm of Aaron Rodgers.  With Nelson one more year removed from knee surgery and the expected reemergence of Randall Cobb to go along with the new weapons in the middle of the field, the Packers will throw and throw some more, leading to a huge year for Rogers.  2017 prediction: 464-670 for 4,352 yards, 35 touchdowns and nine interceptions.

2016 was an incredible season for “Matty Ice” (minus the Super Bowl of course) as the Boston College alum posted career highs in passing yards and touchdowns enroute to being named MVP of the National Football League.  Ryan led all quarterbacks in fantasy points per pass attempt and finished as the number-two overall fantasy-scoring QB in ESPN standard-leagues.  Looking to rebound from the devastating Super Bowl loss to the Patriots, Ryan and the Falcons will look to improve on a NFL-high 33.8 points per game in 2016, but will have to do so with a new Offensive Coordinator.  In February the Falcons hired former University of Alabama OC Steve Sarkisian to replace the departed Kyle Shanahan.  It remains to be seen just how Sarkisian will change Atlanta’s offensive approach, if at all, but he will undoubtedly look to take advantage of the Falcon’s run-game and the play-action pass.  Fielding a dynamic-duo in running backs Devonta Freeman and Tevin Coleman, the Falcons finished the year with the 5th-ranked rushing attack in the NFL. This proved to be an incredible boon to Matt Ryan, who was deadly using the threat of the run to capitalize on play-action.  According to Pro Football Focus, Ryan threw 27.6% of his passes off the run fake and was fourth in the NFL with a 118.2 QB rating on play-action.  The threat of the run will open up the middle of the field for speedster Taylor Gabriel and ascending tight end Austin Hooper, now in his second season. Throw in the fact that Ryan gets to play six games against the NFC South and Matt’s 2017 looks promising.  Going 5-1 in 2016 against division rivals Carolina, Tampa Bay and New Orleans, Ryan posted a combined 130.3 rating versus the trio from the South.  Most of all, let’s not forget that Ryan gets to throw to Julio Jones, the super-talented wideout who just happened to be PFF’s second highest-graded player in 2016.  With the core of the NFC Championship-winning offense coming back in 2017, Ryan will again look to be an MVP-candidate. 2017 prediction: 367-545 for 4,414 yards, 33 touchdowns and 11 interceptions.

Consistency.  That’s been the case with Drew Brees career, and that’s been the case with the New Orleans Saints’ offensive attack.  Consistently pass-happy anyway.  Since 2010 Brees has averaged over 656 passes and 5,066 passing yards a year.  Last year, at the age of 37, Brees led the league with 5,208 yards passing and had ten games where he scored at least 18 standard-league fantasy points.  2017 will look to be no different, despite the loss of speedy wideout Brandin Cooks. Though the combination of newly-signed running back Adrian Peterson and the returning Mark Ingram will probably mean a slight decrease in the number of throws for Brees, New Orleans will continue to be a pass-first team. Drew will get the luxury of playing indoors for ten games in 2017 and with an improving defense looking to get the ball back more often, Brees will have plenty of chances to air it out.  Stepping in to fill the void left by Cooks will be second-year receiver Michael Thomas, who had over 1,000 yards in his rookie campaign, Willie Snead, who has back-to-back 69 + catch seasons and veteran-newcomer Ted Ginn, a deep-speed threat from Carolina.  Also returning is tight end Coby Fleener, will look to be more effective in his second year in the offense after finishing 2016 with 50 receptions.  With a steady stable of targets to throw to this year, Brees will again be a top-5 fantasy quarterback. 2017 prediction: 421-620 for 4,650 yards, 31 touchdowns and 12 interceptions.

2016 was a major bounce back year for the 5th-year QB out of Stanford.  After playing just seven games in 2015 due to injuries, Luck had 15 starts in ’17 and went on to post 4,240 yards with 31 td’s against 13 interceptions.  This was despite the loss of receiving tight end Coby Fleener in free agency, number two wide receiver Donte Moncrief missing seven games to injury and, as has been the norm for most of Luck’s career, playing behind a porous offensive line.  Then to top it all off, in April of this year Luck admitted to playing through a throwing shoulder injury he originally suffered in 2015.  Andrew underwent surgery to repair his shoulder this offseason, and while there is no official timetable on his return, expect him to be ready to go by week 1.  There will be some serious concerns about his arm strength upon his return, and rightly so.  The deep pass was a major component to Indy’s offense last year, as Luck led the NFL in completed passes at least 20 yards downfield, with 39.  The deep ball will need to be there if Luck and the Colts are to have success in 2017.  Injury aside, there is good news for the Colts and their QB.  The offensive line, extremely young last year, has another offseason to improve and gain continuity, Donte Moncrief expects to be fully healthy this season, and running back Frank Gore returns to carry the bulk of the run game.  Luck will also have two dynamic weapons to throw to again in 2017, when Tight End Jack Doyle will look to build on his breakout 2016 campaign, when he led all TE’s with a 78.6 percent catch-rate.  Then there’s the return of speedster T.Y. Hilton, who led the NFL with 1,448 receiving yards and 16 receptions of at least 25 yards. Receiver Kamar Aiken was added in free agency to provide a big target on the outside and Indy loaded up on defense in the offseason, all in hopes of getting the ball back in Luck’s hands more often.  If healthy, Luck will have another big year. 2017 prediction: 384-610 for 4,575 yards, 30 touchdowns and 13 interceptions.

Concerned about Andrew Luck’s health? Click here for Matt’s thoughts on his shoulder injury from a medical practitioner’s perspective.

3 thoughts on “Too early top 5: Quarterbacks”