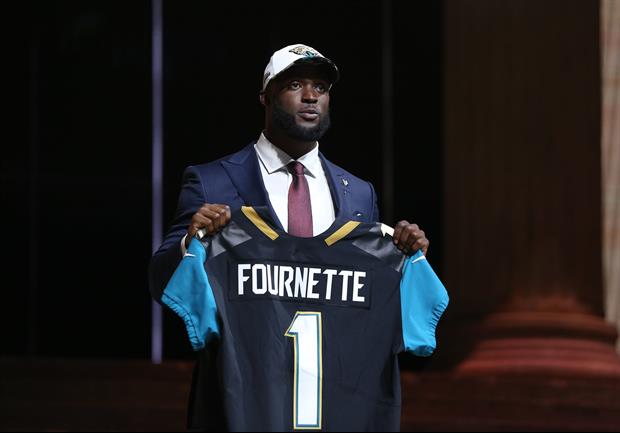 With the fourth overall pick in the 2017 NFL draft, the Jacksonville Jaguars selected running back Leonard Fournette out of Louisiana State University.  Over the course of three collegiate seasons with the Tigers, Fournette rushed for 3,830 yards on 616 carries (6.22 yards per carry average) and 40 touchdowns.  During that same three-year span, ALL Jacksonville Jaguar running backs combined for 3,540 yards on 923 carries (3.84 yards/attempt) and just 17 touchdowns.  You can see why Jacksonville needed an upgrade and Fournette should provide that much needed boost.  Running with a downhill, violent style to go along with a 4.51 second 40 yard dash and great balance, Leonard showcased elite talent at LSU while drawing comparisons to Adrian Peterson.  At 6’0″ and 240 pounds, Fournette is able to shed tacklers and fight through contact for the extra yards.  Pro Football Focus credited Leonard with 95 broken tackles and 3.8 yards after contact per attempt in 2015.  Those numbers dropped some in 2016 as he struggled through an ankle injury,  but he still managed to flash the capability to fight through tacklers.  On November 6, 2016, against an Alabama defense determined to stop the run at all costs, Fournette gained just 35 yards on 17 carries.  Not very impressive at face value, but according to PFF, 34 of those yards came after contact.  Only 1 of his 35 yards was gained before running into an Alabama tackler. Fournette’s ability to make yards out of nothing will be a major boost for the Jags, who have struggled mightily to run the ball in short-yardage situations.  In 2016, Jacksonville ran 73 times on third-and-2 or less and gained a first down on just 34 of those runs, resulting in a league-worst 46.6 percent conversion rate.

A poor run game forced the Jags to throw 626 times last year (4th highest in the league) and new Head Coach Doug Marrone wants to bring balance back to the offense in 2017.  Speaking to reporters on June 15, Marrone said he would like to run the ball every play.  Obviously that won’t be the case, but there should still be plenty of carries coming Fournette’s way.  Leonard will most likely start the season splitting time with 2016 holdovers Chris Ivory and T.J. Yeldon, but that shouldn’t last long. After displaying great hands during OTA’s and performing well as a pass-blocker in college, Fournette is already showing his new Head Coach that he can be a three-down player right away.  Look for Fournette to take over primary ball-carrier duties by week three and to become heavily involved in the passing game as well.  Additionally, Jacksonville seems committed to helping Fournette and the run game improve on last season’s abysmal numbers, as they added fullbacks Tommy Bohanon and Marquez Williams after not carrying a single one on the 2016 roster.  The Jaguars also loaded up on the offensive line, trading for tackle Brendan Albert and drafting guard Cam Robinson.  After finishing 22nd in the NFL in rushing yards (boosted by 359 rush yards from QB Blake Bortles) last season, Jacksonville will look to ride Fournette to a much improved rushing attack.  2017 prediction: 258 carries for 1,057 yards and six touchdowns with 35 receptions for 331 yards and one td.