The Pittsburgh Steelers’ wide receiver finished the 2016 season second in the NFL with 106 receptions and was the highest Yahoo PPR-league scoring wideout with 317.45 total points.  Brown was targeted a whopping 159 times last year and the trend is sure to continue.  Though the Steelers may get Martavis Bryant back from suspension and drafted JuJu Smith-Schuster in the second round of the 2017 NFL Draft, Antonio is a lock to remain the number one option for a team that has averaged over 599 pass attempts a season over the past three years.  With Markus Wheaton signing to play for the Bears and Sammie Coates recovering from groin surgery, the Steelers lack a true #2 receiver until Smith-Schuster develops.  The Pittsburgh passing offense will continue to funnel through Brown and running back Le’Veon Bell.  2017 Prediction: 109 receptions, 1,213 yards and 10 tds.

Matt’s Thoughts: Antonio Brown is simply a stud and definitely a top three WR no matter your league’s scoring settings. I think you may have some people who will be hesitant with this pick because Big Ben Roethlisberger (B.B.R.) seems to have an injury tag weekly and Brown’s numbers may suffer if B.B.R. isn’t throwing the pigskin. To those darn nay-sayers out there I would say, “Remember that B.B.R. has started at least 12 games since 2004 and over the past four years he has missed only six games. Not too shabby.” I would also remind them, “Landry Jones is Ben’s backup and in the four games the fourth round 2013 draftee from Oklahoma has started, he averaged a QB rating of 82.25.” Then when those same nay-sayers are like, “Matt, that isn’t a very good QB rating,” I’d be like, “Pfft, what do you know?” Then my valley girl voice would kick in and I’d say, “Like, also, when Landry and Brown started the same games over the past two years, Brown always had more than six catches and over 100 yards in receiving, so, like, there.” And those nay-sayers would bow to me, submit to my random NFL knowledge, and walk away slowly, slightly ashamed they ever doubted. That is how it goes in my mind anyway.

In 2016 the rookie out of Ohio State totaled 92 receptions, 1,137 yards and 9 touchdowns.  His second year looks to be even better.  Brandin Cooks, with his 78 catches and 8 td’s was shipped off to New England and no replacement was added in free agency or the draft.  And don’t let the Adrian Peterson signing fool you,  New Orleans will still be a pass-first team.  Coby Fleener and Willie Snead will look to build on their ’16 seasons, but Thomas, with his reliable hands and sharp route-running will avoid the sophomore-slump and be the apple of Drew Brees’ eye.  Over the past three seasons Brees has thrown an average of 653 times a year. Look for another 600-pass season for Brees and 150+ targets for Thomas.  2017 Prediction: 108 receptions, 1,337 yards and 8 touchdowns.

Matt’s Thoughts: Potential baby! I think Thomas could help you win your league and may be even better than Antonio Brown! Yeah, I said it. Mainly because the Saints are still extremely pass heavy and the Steelers are going to feed Le’veon Bell, but still, you have a 6’3″ rookie who put up great numbers in his rookie season and is primed to explode with Brandin Cooks now gone. Forget about a sophomore slump and find a way to get him on your team!

In his first year back from ACL reconstruction in 2016, Green Bays’ Jordy Nelson posted a league-leading 14 touchdowns on 97 receptions. His comeback season saw him lead the Packers with 152 targets and 1,257 receiving yards.  This year, the touchdowns will most likely drop closer to his career average of eight td’s a year, but his primary role in the offense will continue.  The second year removed from knee surgery is said to be when a football player finally feels back to themselves and 2017 should be no exception for Jordy.  Davante Adams and Randall Cobb will still see plenty of targets themselves, and the addition of tight end Martellus Bennett will cut into Nelson’s looks as well, but there are plenty of passes to go around in Green Bay.  The Packers will enter 2017 with former-receiver Ty Montgomery the starter at running back, indicating Aaron Rodgers will once again look to air it out big time, as he has averaged over 567 throws a year since 2013.  2017 Prediction: 93 receptions, 1,211 yards and 9 touchdowns.

Matt’s Thoughts: For those of you who are sold on Jordy Nelson, PROCEED WITH CAUTION. Nelson had a “slow” start for the first eight games in 2016 and was averaging 16.75 fantasy points over that time period. You might be thinking to yourself – well that isn’t too bad – but he was primarily touchdown dependent scoring six touchdowns in eight games. The two games in those eight weeks where he didn’t get a touchdown he scored a middling 11.8 points and a busted 1.9 points (PPR scoring). Though the last eight games of the season he certainly earned WR1 status while averaging 21.475 fantasy points per game. HOWEVER, I think this is due to Green Bay’s running game getting back on track with Ty Montgomery in the second half of the season and forcing defenses to play the run.

This may seem Peter Parker like (Spider Man reference), but I get a sense that Nelson is on the decline. Yes, because of a slower start last year, his age, knee injury, and his dependency on having a good running game, but also because of some subtle actions on the field. There was one game in particular where Nelson wasn’t having a good game, touchdowns were going to everyone but him, and he stopped celebrating with his teammates. To me this is significant. A player who doesn’t think it’s fun to win if he isn’t catching the ball is going to be a declining player. Of course this is just a feeling, not a fact, but, like Peter Parker, it may save my life… or at least my fantasy football team. Bottom line – think twice about drafting him in early rounds and expect a sub-par season if the Green Bay running attack suffers or if Nelson can’t find the end-zone on a regular basis.

Since exploding onto the scene as a rookie in 2014, Odell Beckham Jr. has averaged 96 catches, 1,374 yards and 11 touchdowns a year.  In 2016, while facing constant double-teams and cornerbacks trying to get in his head, Beckham Jr. was targeted 169 times, totaling 101 grabs, 1,367 yards and ten td’s. Odell will look to post his second consecutive season with 100-plus receptions in 2017, and will remain the focal point of the Eli Manning led passing-attack.  The continued development of Sterling Shepard along with the addition of red-zone monster Brandon Marshall will most likely cut into Beckham’s td total, but the receptions and grabs should still be there in 2017.  Beware, there will be some inconsistency from week to week, as Beckham was a little too-dependent on the big play in 2016, with five games where he averaged under ten yards a catch, but Odell will remain a true number one fantasy option.  2017 prediction: 100 receptions, 1,131 yards and 6 touchdowns.

Matt’s Thoughts: Guys who are uber-talented like Odell Beckham Jr. will find a way to be a legitimate force in the game which means a legitimate fantasy option. Case in point – Texan’s WR DeAndre Hopkins who, despite getting double-covered every game and having poor QB play, still found a way to be a great fantasy player (nearly 1,000 receiving yards and 78 catches in 2016). If he stays healthy, Beckham Jr. he has as good a chance as anyone in being the #1 WR for 2017. 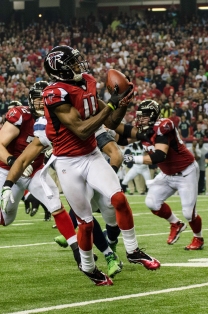 When healthy, Julio Jones is arguably the best receiver in the NFL.  His problem is staying healthy.  Julio has only played two complete seasons since coming into the league in 2011.  There is no arguing his talent on the field, but in fantasy football, a manager needs a wide receiver to play.  Managers hoping for a repeat of his monster 2015 began to dread the weekly injury report, as Jones was a regular on the ’16 list with various calf and ankle injuries.  Like Beckham, Julio struggled with inconsistency (fantasy-wise) throughout the 2016 season, with six games under 70 receiving yards, and was often times-used as a decoy to fuel the Falcon’s run-game.   The hiring of Steve Sarkisian to replace Kyle Shanahan at offensive coordinator will also have a negative impact on Julio’s numbers in 2017. Only once in his career calling plays at USC, Alabama and the University of Washington did Sark call more pass plays than running plays, and that was in 2009.  While Atlanta will most certainly focus on the running game to get back to the Super Bowl, there is no denying the connection Julio has with his Quarterback Matt Ryan.  Over the past three seasons, Julio has drawn the target on over 27 percent of Ryan’s passes. This amounts to about eight targets a game, and with Julio’s 65 percent catch-to-target ratio over that span, the receptions are still bound to pile up. 2017 prediction: 81 receptions, 1,275 yards and 7 touchdowns.

Matt’s Thoughts: From a fantasy perspective, having a top five player with turf toe is arguably worse than having a top five player with a season ending injury. With nagging injuries a manager is left second and triple guessing if they should start the player, often times getting poor performances or no start at all. A questionable player take up precious bench space, and can lead to life threatening stomach ulcers from all the stress. How do I know? Because I had Julio Jones on my team/bench/decoy starter last year! I’m not going to make the same mistake twice and I suggest you don’t either. Jones’ ceiling is getting lower, not higher and frankly I don’t think he should be a top five consideration. Stop ulcer causing stress while you can, blood transfusions aren’t as fun as they sound, pass on Julio Jones this year.